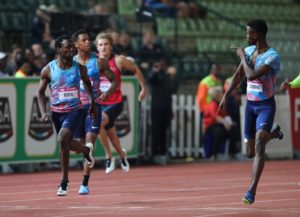 The 200m Men’s race was billed as one of the highlights and was duly delivered on as South Africa’s former World Championship bronze Medalist, Anaso Jobodwana, not only won the battle of words with his young rival, Clarence Munyai, but was also first over the line in the final event of the evening which delivered high octane athletics at the inaugural Liquid Telecom Athletix Grand Prix Meeting in Ruimsig on Thursday, 01 March 2018.

Jobodwana, running in Lane 4, had to chase hard to catch Munyai who had not only blasted out off the blocks like a man possessed, but also ran a bend that on most occasions would have won him the race. In the final 20m Munyai tensed up and allowed Jobodwana to snatch victory, crossing the line in 20.13sec to equal his 6th best ever time.

In typical Jobodwana fashion, once he had drawn level with Munyai, the lanky sprinter kept glancing across to his rival with a smile on his face, knowing that the race was his.  “Where did Anaso come from?” Munyai asked post-race whilst lying in the mixed zone after what was clearly a hard run. “How did he come past me?”

Jobodwana too was breathing hard.  “I’m glad to be back where I was three years ago. My form is coming back and I am feeling good. I’m really happy with my run today. I didn’t want to race here because it has been a long time since I have run a 200m and the guys like Clarence and Isaac (Makwala) are dangerous. So this means a lot to me. I’m healthy. My form is coming back and I am excited to be racing well again.”

Jobodwana wasn’t the only athlete to get the crowd roaring. Earlier on Welshman, Dai Greene won the 400m Hurdles in 49.38sec, his best time since 2013. Greene won the world title in 2011 and has since had three operations. Earlier in the week he clocked 49.49sec in Potchefstroom to qualify for the Commonwealth Games.

“This was a really good week for me. Qualifying for the Commonwealth Games after years of injury was big for me. But to improve on that time from Tuesday after sitting in traffic for 40 minutes before the race really has me excited.”

Greene defeated long-time rival LJ Van Zyl who crossed the line in 49.64sec. This is the first time the multiple SA champion and SA Record holder has dipped under 50sec this season and the 32-year-old was smiling from ear to ear after his race.

The Ugandan duo of Winnie Nanyondo and Halimah Nakaayi did not disappoint as they went one-two in the 800m Women. It was Nakaayi though who took the win over her more fancied rival. After going through the bell in 59sec, Nakaayi stayed in front on the final lap to win in 2:01.44 with Nanyondo coming home in 2:02.84 and Gena Lofstrand (2:03.56) rounding out the top three.

Botswana’s Amantle Montsho, the 2011 World champion in the 400m, destroyed the opposition with her 50.66sec in the one lap event. Justine Palframan had to settle for third behind Botswana’s Christine Botlogetswe (52.07) with the 5th best performance of her career, running 52.19sec.

Seventeen-year-old, George Manangoi showed just why he is the World Youth 1500m champion from 2017 when he came flying through in the final 30 meters of the 1500m to win in 3:40.62. Manangoi is the younger brother of the World 1500m champion, Elijah Manangoi. It was young Ryan Mphalele who had the crowd on their feet with his aggressive approach to the race, challenging for the lead in the final 500m. Mphahlele ran shoulder to shoulder with Uganda’s Ronald Musagala into the home-straight, but had to settle for third behind the fast finishing Kenyan, Manangoi and Musagala.

“I was boxed in and had to get clear and was able to do so. My kick is good and I could see the others tiring, so I made my move in the final 50m,” said Manangoi.

Athletics South Africa (ASA) is the national governing body for the sport of athletics (including track and field, cross country, road running and racewalking) in South Africa, recognised by the IAAF, and also a member of Confederation of African Athletics.  The association is based in Johannesburg.