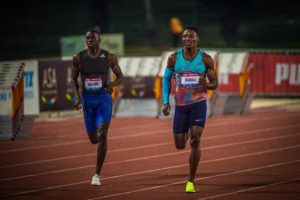 Makwala will only be the 4th athlete to go under 31sec should he accomplish the feat on Thursday, 08 March.

Clearly in a confident mood, Makwala said that if the race was in June he would be looking at the world record. But it is March, so a sub 31sec is a more realistic target.  After running national records for both the 200m (19.77Ssec – 14 July) and 300m (31.44sec – Ostrava, 10 June) last year, the 31-year-old has clearly grown in confidence.

“I did not go flat out in the 400m on Thursday (1 March) because I still had the 200m a bit later in the evening. But there is only the 300m for me this Thursday (8 March), so I feel very confident about getting close to that sub 31sec,” said Makwala.

He will line up against amongst others, Pieter Conradie, who was third in Ruimsig (45.77sec) and young Thapelo Phora who ran a Personal Best of 45.39sec to finish second behind Makwala in Ruimsig. Also in the field is the dangerous Ofentse Mogawane who is renowned for his aggressive front running tactics.