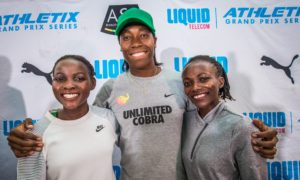 Caster Semenya will face the Ugandan challenge of Winnie Nanyondo and Halimah Nakaayi this coming Thursday, 08 March 2018 at what should be an action-packed second Liquid Telecom Athletix Grand Prix Series Meeting at Tuks Athletics Stadium in the seldom run 1000m.

This will be a first for the entire line-up as not one of these athletes has raced in a competitive 1000m.

Semenya should start as favourite based on her Personal Best times, however this is a non-standard distance and will affect pace judgement. Nakaayi won the 800m at the first Liquid Telecom Athletix Grand Prix Series Meeting last Thursday (01 March) in Roodepoort, ahead of her countrywoman, Winnie Nanyondo. However, all bets are off as the duo look to take the biggest scalp of their careers.

Semenya, who won the gold medal in the 800m and bronze in the 1500m at the 2017 IAAF world Championships in London, is looking forward to the encounter, in particular in front of the crowd at Tuks where she is now training.

“It is always a pleasure to run here. This is now my home and I love racing in front of the people at Tuks. They are always very supportive,” said Semenya.

On the Ugandan challenge, Semenya is relishing the chance to take on international athletes at home. “It is exciting. I am always racing international competitions in Europe or America, never at home. So to face Winnie and Halimah at home is fantastic for the sport. And I know they will want to run fast. I saw them run in Roodepoort and they mean business.”

A few weeks ago, Semenya hinted at chasing the South African record of 2:37.2 run by Ilse de Kock Wicksell in 1983, if the pace was right.

“I did mention that maybe the (SA) record could be on the cards a few weeks ago, but now with the Ugandan girls, I know it will be a hard race.”

Both the Ugandan athletes are keenly anticipating the race against Semenya. “This is why we came to South Africa. We want to race against Caster on African soil. It is important to us,” said Nanyondo.