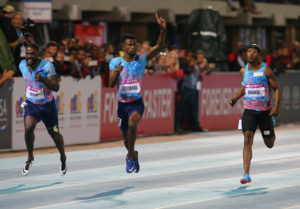 Jobodwana started celebrating 20 meters before the line, knowing that he had claimed one of the biggest victories of his career in a time of 15.08sec ahead of Roscoe Engel (15.17sec) and Luxolo Adams rounding out the top three (15.18sec). Gatlin had to settle for 4th (15.23sec), but that did not stop the American from spending time with the crowd and posing for endless pictures.

“It’s all about the fans,” said Gatlin. “They are the reason why we race”.

Jobodwana had just become a father the day before. “Before the race I was just thinking about the last two years (he had struggled with injuries), my wife in America and my son being born yesterday. All that gave me the power to execute and run my race. I am very happy, as I am almost back to where I was.”

Gatlin was gracious in defeat, praising Jobodwana. “He ran a great race and it is good to see him running so well again. Next time I hope to come through earlier, I did feel a bit jetlagged. So my coach told me to focus on my first 100m and see how I best finish the last 50m. I still felt I would win with 30m to go, but the legs came off. I usually open in May, so this was a bit early for me. But overall I am happy.”

The 150m was the final race of an evening that saw spectacular performances coming in quick succession.

“That was a good race for me. I know where I am in my training now and I am on track for what I want to achieve.

Nicholas Bett won the 400m Men’s Hurdles breaking 49sec for the second time this year, winning the race in 48.88sec ahead of Le Roux Hamman (49.22sec) and LJ Van Zyl finishing in third.

Uganda’s Joshua Cheptegei showed just why he is the world 10 000m silver medalist, running a controlled 3000m race. Cheptegei sat behind pacemaker Elroy Gelant until he pulled off after 2000m. Cheptegei then raced on his own dragging young Ryan Mphahlele to a sub 8-minute time. Cheptegei looked majestic as he won in 7:49.48 with Mphahlele clocking 7:59.77 in his first 3000m outing, once again taking some big scalps.  Ronald Musagala rounded off the podium.

Akani Simbine lived up to his billing as the fastest man in South Africa, opening his 2018 season with a 10.05sec win. “I am happy with the win. I made sure that I focused on the first 60m and I executed that well. It is important to me to do that. Everything is going well in my group and I’m looking forward to the season.”