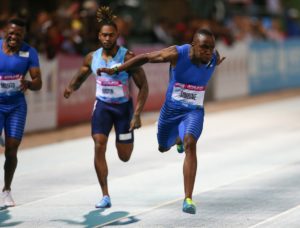 Akani Simbine and Henricho Bruintjies are undoubtedly one of the major drawcards in the men’s 100m at the 3rd and final Liquid Telecom Athletix Grand Prix Series Meeting at the Dal Josaphat Stadium, Paarl this coming Thursday, 22 March 2018.

For Simbine, it’s a final test before departing to the Gold Coast, Australia for the Commonwealth Games, while for Bruintjies it is a home coming and an opportunity to race in front of his home crowd (Paarl) where he will gun for the scalp of his friend, Simbine.

The much expected duel between the two did not materialise at the national championships, with  Simbine withdrawing after the first round as a precaution. Simbine had complained of a tight hamstring and after consulting with his coach, withdrew from the race.  Bruintjies went on to win the bronze medal.

Now the two will go head-to-head at the final Grand Prix Meeting in Paarl.  Bruintjies grew up in Paarl, so for him to be able to race in front of what is still his hometown, has special meaning.

“I’m looking forward to running at home,” said Bruintjies. “Moving up to Tshwane was the right decision for my athletics career, but being able to run at what I still see as home, is a big deal for me.”

Bruintjies is the last man to beat Simbine on South African soil in the 100m after he edged the South African record holder at the 2016 ASA Senior Championships in Stellenbosch, a stone’s throw from where Bruintjies grew up.

Simbine put all fears to rest after withdrawing saying he was healthy, ready and eager to race in Paarl. “I felt a tightness in my hamstring and after discussing it with my coach, we opted to withdraw from the championships. This was one of the hardest decisions that I have made, as the national title means a lot to me and I enjoy running in front of my home crowd.  It is important to me to be able to do that as they always support me, so I feel it is my responsibility to reciprocate by racing at Tuks. But I had to make the hard decision.”