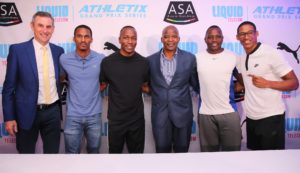 After two scintillating Meetings on 01 and 08 March at Ruimsig (Johannesburg) and Tuks (Tshwane) respectively, the Liquid Telecom Athletix Grand Prix Series final moves to Dal Josaphat Stadium this coming Thursday, 22 March and it promises to be yet another high octane, explosive 90 minutes of athletics action. 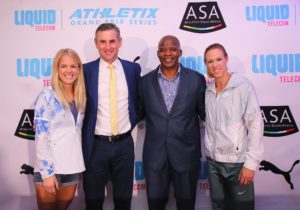 Sub 4-minute mile on the cards

A deep field lines up in the men’s mile and there is a distinct possibility that more than one athlete can break the magical 4-minute barrier. Headlining the field is 20-year-old Ryan Mphahlele who brought his Personal Best in the 1500m down from 3:44.03 to 3:41.65 at the first Liquid Telecom Athletix Grand Prix Series Meeting in Ruimsig on 01 March, before breaking 8 minutes for the 3000m at the second Meeting at Tuks on 08 March.

Newly crowned SA 5000m champion and SA 1500m silver medalist, Jerry Motsau, former SA 1500m champions Dumisane Hlaselo and Flavio Sehole are also in the line-up and have a point to prove after not performing as expected at the national championships in the 1500m.

Ruswahl Samaai loves competing in the Western Cape. His two national titles were won at Stellenbosch in 2015 and 2016.  Dal Josaphat in Paarl, his home town, should provide a big support base for the 26-year-old World Championship bronze medalist. Samaai, who won the silver medal in the men’s Long Jump at the SA Championships on 17 March will be up against bronze medalist, Zarck Visser and 2008 Olympic silver medalist, Khotso “the Crocodile” Mokoena. All are more than capable of going over 8m and coming close to 8.20m if not further which should make the men’s Long Jump a titanic and tight battle.

Akani Simbine missed out on defending his 100m national title after withdrawing from the semi-finals with a hamstring twinge.  2016 SA 100m champion, Henricho Bruintjies who hails from Paarl, had to settle for bronze, while Simon Magakwe won his seventh national 100m title after a two-year absence. Bruintjies would like nothing more than to win in front of his home crowd.  Simbine is looking for a good showing before heading Down Under for the Commonwealth Games on the Gold Coast, while Makagwe wants the scalp of Simbine. Throw in Western Province’s Roscoe Engel who has run the second fastest 100m in South Africa in 2018 and you have a race that will have the spectators on the edge of their seats. 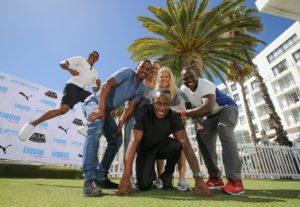 Julius Yego became famous for learning to throw the Javelin by watching YouTube videos, hence the nickname. The Liquid Telecom Athletix Grand Prix Series Final will be his major competition before the Commonwealth Games. Expect a big throw from a man who has gone beyond 90m on two occasions already and who boasts an average of 87.54m.

Athletics South Africa President,  Aleck Skhosana expressed his and the board’s satisfaction of the series, saying it had contributed immensely in bringing the sport to a new level. “With international athletes once again gracing our shores and South Africa’s finest showing that they can compete with the best, we are very proud of where the sport currently is and where it is going. We have no doubt that the third and final Liquid Telecom Athletix Grand Prix Series Meeting will be just as exciting and explosive as the first two meetings.”